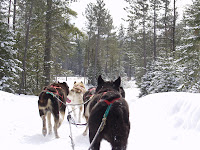 The Southern Terrain recently completed a winter leadership program into the Boundary Waters of Northern Minnesota. The group consisted of several MBA students from Kellogg School of Management. The program was staged out of Ely, Minnesota on the border of the most visited wilderness area in the entire United States.

The group arrived late Friday night and shuttled to the cabins on the shores of Gegoka Lake, MN. The following morning we had a program brief and a gear review session prior to departing for the kennel. We feasted on a large breakfast consisting of french toast, fresh fruit, muffins, bagels, eggs and hash browns to ensure we properly fueled for the upcoming adventure.

We arrived at the kennel to the sounds of over 100 dogs getting excited for their journey. Each dog an Alaskan Husky, not a bread of dog by rather a type type best known for dog sledding racing and speed competitions. We donned our insulated boots, received a instructions from our champion dog sled racing leader, and harnessed up the team. We put the lead dogs on first followed by the team dogs and finally the wheel dogs in the back. The dogs each had a very distinct personality and they knew what their roles were on the team.

As we packed up our sleds the roar of the dogs created a buzz in the yard in anticipation of getting on the trail. With a load "alright" our dogs charged own the trail pulling our sled at maximum speeds. We navigated through the forests and into open swap areas that had been frozen over for the season. The fresh snow pack provided a nice cushion for the dogs allowing the sled to glide over small roots and trees. We continued through the single track trails stopping with the occasional "whoa" to give the dogs a well deserved rest. 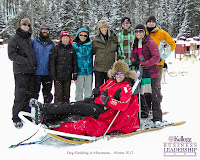 We concluded the day on a frozen lake where the group worked together to prepare camp, tend to the dogs, cook amazing tortillas, and build a fire on the ice. The camp was set up with nice tents but the overall consensus was to sleep out underneath the stars. It was a long 22 mile day on the trail but warm beverages and hot dinner made it easier to sink into our bags for the evening.

The following morning we proceeded to work together to break down camp, and with one leader directing the effort the camp camp down quickly. We left and led our team of dogs at a frenzied pace through the trees with numerous "haw's" and "gee's". The snow was coming down in blizzard conditions and we made it back to base in time for hot soup and scones. The team said goodbye to the dogs and drove through the elements to get to the airport on time. This unique experience created a significant amount of group cohesion, camaraderie, and opportunities for everyone to experience something outside their comfort zones.

Stayed tuned for our next adventure update.